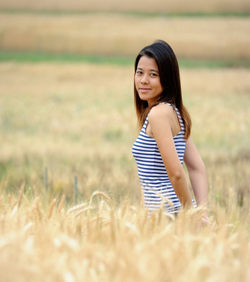 Are you one of the 30 million Americans that suffers from hay fever? Acupuncture can help!

In spite of its name, hay fever does not mean that somebody’s allergic to hay and is suffering a fever. Hay’s hardly ever an allergen, and hay fever doesn’t cause fever.  So now that we’ve got that straightened out,  hay fever, (or allergic rhinitis, if you want to get technical) is a common condition that shows signs and symptoms much like a cold with sneezing, congestion, runny nose and sinus pressures. Hay fever can start affecting people at any age, it generally develops during childhood or early adulthood.

Why does it happen? Like all allergies, hay fever stems from a glitch in the immune system, a result of it mistaking a benign substance as a harmful one.  Instead of attacking harmful foreign substances such as bacteria and viruses, it tries to neutralize “invaders” that ordinarily are quite harmless — in this case weed pollen grains that fill the air from August through October.

In someone with hay fever, breathing in these tiny particles sets off a cascade of biochemical reactions, resulting in the release of histamine, a protein that causes the unenjoyable symptoms of  sneezing, congestion, and fatigue. Histamine can also cause coughing, post-nasal drip, itchy eyes, nose, and throat, as well dark circles under the eyes and asthma attacks. Add irritability and insomnia, and hay fever can definitely make you feel very un-fabulous.

Some people are only mildly affected by hay fever and rarely reach a point where they decide to seek medical attention. However, for many, symptoms may be so severe and persistent that they are unable to carry out their daily tasks at home, work or at school properly. Many people wish to avoid over the counter medications due to concerns about side effects, especially pregnant women.

Acupuncture is one of the major holistic therapies used through thousands of years to address the underlying energetic relationships in the body that enables the allergy symptoms to arise. In fact, the World Health Organization states that “In controlled studies, it has been shown that acupuncture is more effective than antihistamine drugs in the treatment of allergic rhinitis. Acupuncture’s lack of side-effects is a distinct advantage in treating this condition…” In addition, a study published in The Medical Journal of Australia carried out by researchers at the University of Melbourne also suggests that acupuncture is effective in the symptomatic treatment of persistent allergic rhinitis. (MJA 2007; 187 (6): 337-341).

Acupuncture treatments aim to give immediate relief from the symptoms, and further, it can address the variety of underlying causes.

Point sites for the underlying causes will be found on an individual basis after a thorough case history. Point sites for immediate relief include local points near the actual symptom places such as the sinus areas, and others not so obvious to understand such as near the hands or feet. The point sites are always on the skin and the surface of the body. A patient will happily experience immediate improvement of the symptoms, and be encouraged therefore to continue to pursue the underlying causes in future treatments. Long term, the symptoms cease to arise and the reactiveness calms.

For more information, visit us at www.ctacupuncture.com