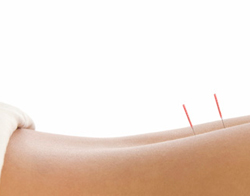 Lyme Disease is a disease that is transmitted to humans through the bite of an infected tick. Left untreated, it leads to permanent problems with the heart, joints and nervous system. Typical symptoms include joint ache, skin rash (particularly in the area surrounding the bite), headaches, fever, profuse sweating and fatigue, though all of the symptoms are not present in every case. Early detection and treatment is vital in preventing Lyme disease from advancing to the later stages.

Deer ticks are extremely small (about the size of a poppy seed) and are found in tall grass, wooded areas and anywhere else where deer or other small rodents are present. Fortunately, deer ticks don’t bite humans immediately upon contact; they typically spend several hours crawling around before attaching themselves to the skin. Even then, it takes longer than 12 hours after that for the disease to be transmitted, so finding a deer tick on your body isn’t necessarily an indication that you have been infected. However, if you have been bitten, the symptoms typically appear within 7 to 14 days. A simple blood test is all that is required to determine if Lyme disease is present.

At the earliest point in time, recognize you may have Lyme, go to a doctor, and get antibiotics immediately. The spirochetes are a serious problem that I believe require proper antibiotics (doxy) and MD care.

In addition, acupuncture is highly relevant for all phases of this disease. Whatever your stage is, hurry in to acupuncture. We will improve your immune response, healing action, body chemistry, and the subtle energetics that acupuncture is ideal for correcting and supporting.

You will be amazed at the immediate improvement of joint symptoms, as well as the chronic fatigue factors that respond to the very first treatments. This is encouraging, and depending on how long you have had Lyme, how many times, or how many years, you will need a series of treatments to hasten your complete recovery. As in all conditions and all patients, each person’s regime of treatment will be individually designed.

The study on Stevia, titled “Effectiveness of Stevia Rebaudiana Whole Leaf Extract Against the Various Morphological Forms of Borrelia Burgdorferi in Vitro,” was conducted by researchers from the Department of Biology and Environmental Science at the University of New Haven in West Haven, Connecticut. The researchers concluded that “Stevia whole leaf extract, as an individual agent, was effective against all known morphological forms of B. burgdorferi.”

Stevia leaf extract is rich in many phytonutrients that are known antimicrobial agents. For this study, the antimicrobial effect of stevia extracts was examined in comparison to doxycycline, cefoperazone, daptomycin, as well as combinations of these antibiotics, as they were revealed to be effective against the persistent forms of Lyme disease. Results showed that the stevia leaf extract was effective against all forms of the bacteria in lab tests. Four extracts were tested, and one was chosen as the most potent, thought to be the outcome of its growing conditions and the agricultural practices utilized.

The stevia extract was found to work against even the most antibiotic-resistant of the bacteria, known as the biofilm. The individual antibiotics, on the other hand, actually increased the biofilm rather than eliminating it.

The culprit behind Lyme disease, which is a bacterial infection, is spirochete bacterium Borrelia burgdorferi. The antibiotics proven to kill this form of bacteria are doxycycline and amoxicillin. However, Borrelia burgdorferi can be found in morphological forms, including spirochetes, spheroplast (or L-form), round bodies, and biofilms. When conditions are considered unfavourable for the bacteria, it morphs into the dormant round body, then hides in a biofilm form. When conditions are favourable, however, it can shift back to its spirochete form.

I Never Would Have Believed Acupuncture Could Help My Lyme Symptoms

“After the initial ‘feel much better’ phase resulting from antibiotics my body was back to random aches and pains. I never would have believed that acupuncture could help so much. After a few treatments my feet stopped aching and my energy returned. I would recommend acupuncture to anyone suffering from Lyme Disease.” — G. Watkins, Easton, CT